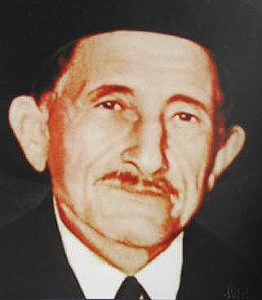 2017 is the commemorative year of the Centenary of Francisco Fernando Filho, “Tetéo”, was born in December 13th of 1917.

Here in the material plane, Tetéo’s principal mission was to encounter the Doctrine of the Santo Daime in the mid-sixties when he met his Master Raimundo Irineu Serra, “Juramidam”. With the passage of Mestre in 1971, Tetéo served alongside Leôncio Gomes who was appointed by Mestre to preside over the works in Alto Santo.

Tetéo’s spiritual pursuit was to become a good brother, well disciplined in the lines of the Queen of the Forest. Through the Daime, he sought the light of understanding. In the Daime, he sought everything. This is why he sings “É um, é dois, é três, é quatro, é cinco, é seis, quem nao tiver compreendendo, tome Daime outra vez”. In this hymn he says, if you did not understand the first time, the second, the third, the fourth, the fifth, the sixth, then drink Daime again.

Tetéo always sought to be in solidarity with his brothers and sisters, especially during times of suffering. Whenever a brother or sister fell ill, Tetéo would be by their side to help them with their healing. In his hinário, he advises us of the importance of being in concentration and prayer to assist and bring comfort to those that are suffering by saying: “Adoece um irmão e ninguém faz concentração, a bem da saúde dele, e dá conforto a seu irmão”.

For this and much more he received from Mestre the title of “Assessor”, the advisor, strengthening the Doctrine and each one of us.

Singing his hinário o “Assessor” for the 1st time in New York promoted by CEFLINA (Sol Sagrado) it is part of this commemorative event.